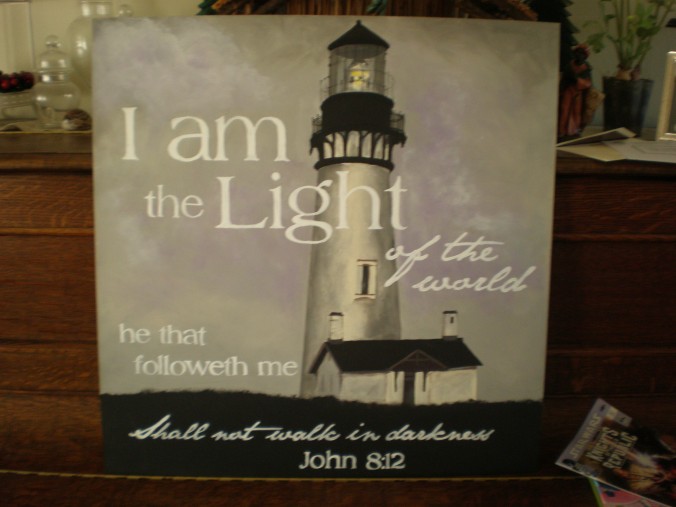 Whoo-hoo. Maybe this will make me feel like I’m actually getting things done.

9:24 p.m. Kids are all in bed, two loads of laundry done (not folded), just finished re-wallpapering the wall in the Toile bathroom where Jeff tore a big chunk off. Been meaning to do it for months, now it’s fixed. Also spackled and repaired hole in wall where Bean used towel bar for chin-ups.

11:11 p.m. Finished Mo’s birthday present (only two months late…) Made three Christmas pillow-cases for the kids, and two swadling blankets for my darling new nephew Matthew. Now to check the wallpaper in the bathroom and see if everything set up right.

11:33 p.m. Towel rack hole is set up nicely, paper is adhered and bathroom is clean. First load of dishes in washer, debating doing 2nd by hand now, or waiting and putting them though the washer. I hate dishes. I would rather clean toilets than do dishes. Really.

11:49 a.m. Gotten two kids off to school, self showered and cleaned, Abby dressed and fed, a few phone calls returned, another load of laundry done (still nothing folded)  and that’s about it. My bagel just popped in the toaster. Up next: another load of dishes, the kitchen floors, and Playroom Napalm.

How pathetic is it that I have to resort to such self-manipulative tactics to motivate myself? Sheesh. It’s like watching paint dry- and yet, I find myself oddly exhilarated as I get to add a new ‘accomplishment’ to my list. To what depths have I sunk? My life is so sad.

1:38 The kitchen is clean, including the inside of the microwave and the pans under the burners. The butcher block is cleaned and oiled, the toaster-leavins’ are wiped away. Abby has been in my make-up again, only this time she hit the blue eyeshaddow. Hard. She looks like Mimi. And it’s too cute (or else I am too tired to care) to wipe away.  The laundry piles are evening out, and with another load, I may have more DONE than I have LEFT. Maybe.

Just finished a commissioned painting for Nestle. Only thing left to do is some lettering, sign it, and take it to be archivally packed and shipped. Whew. Been feeling REALLY guilty about this one for a loooooong time.

Because blogging in the middle of the night is always a great idea! What’s with the insomnia lately? It’s sttress, (see, I’m not going to fix that typo, because even my fingers are stuttering) I know, but seriously, 3:34 a.m. and I’m all hot and sweaty and bothered. No, not from that; from cleaning out my pantry. Oh yes, because one cannot sleep when the messy pantry is calling. Never-mind the dishes in the sink, or the laundry monster creeping and twisting down the hall like some possessed half-zombie. Nope. The pantry.

My pantry is really more of  New York apartment. I’d lay money, somewhere in Manhattan is a sap with his twin mattress crammed into a closet smaller than where we keep our food. Food is important. And since my children were apparently born in a barn, and like to hoof up to the trough and eat from the box, the floor, the shelves or anywhere there might be a morsel of twinkie, my pantry looks like a sty.

I clean, organize and label, then my children go in and do gleeful piggy rolls while they throw boxes of cereal in the air, dance on cheezy puffy nuclear niblets and smear chocolate syrup on their rosy complexions with wild abandon.

That really is the only explanation.

So, I figure, since it’s the middle of the night, I’ve got about four hours where it will actually stay clean. With the newly added doorknob prophylactic, I may get another five minutes of clean.

My RS president came over today (yesterday? yes? yesterday.) and we took apart my sewing machine. It was like watching two chimpanzees try and figure out a how to fix a submarine (or some equally absurd metaphor).  Let’s unscrew this, and take that off, and if we could juuuuuust pop this thingy off, oh crap! I dropped the screw… what’s this do? No! Let me unplug it first! You think this paperclip will stand in for a screwdriver? Now where ‘d that little black thing go? Maybe  if I could just… uh-oh…

After about an hour, we managed to get the Genie back in the bottle, and agreed repairing Berninas is better left to the professionals. If you’ve never seen the insides, trust me, there are lots and lots of circuit boards, wires and little tiny thingys. Makes me want to oil up my treadle machine and give it a whirl- that’s just feet-powered. If I gave Beanie a whole bag of M&M’s, you think maybe…? Nah….maybe…

This afternoon, David comes in the bedroom while I am doing a breathing treatment (asthma’s been particularly bad lately) In his hand were two empty Kotex tampon plastic thingys. He holds them out, ” Guess where I got these?”

David, looking a little green around the gills, “The boys were using them as trombone whistles.”

*snerkle* Can disgust and giggles inhabit the same space at the same time? Gross. Ah, bribery, such a sweet thing in a bout 10 years.

My sewing machine died. It was 1:30 a.m. and it just quit. Kaput. Now what? I have a million Chistmas presents to make, and no money to have the machine fixed. Crappity crap crap.

I am thinking of what y’all suggested, but am unsure how to tell you about my husbands job needs without giving out too much personal information… I will continue to ponder. Thanks

As a blog grows, so goes the annonymity of the author. When I first started, I cared about that- now, not so much. It’s a double-edged sword. On one hand, I have the wonderful luxury of having friends and dear ones in my life that I would never have known. On the other hand, I have ticked off loved ones with what my restless fingers tap out late at night. When I first started, no one was reading, and I had freedom to say whatever I wanted- no one cared. Now, people care. And that’s a good thing. It also makes me more careful.

So what am I dancing around here? What’s the elephant in the middle of the room? Well- I want to write more about our situation. Our little, um, financial situation. Our little, as in, all gone, money problems. But talking about money is so gauche. It’s so crass and crude and well, so what. I have none anymore. But how do I write about what’s in my heart and what’s not in my pocketbook, without seeming pathetic? I have no idea, but I don’t much edit myself, so why start now.

We made six-months of savings last almost a year. But even the Hanakkah lamp eventually ran out of oil. We are out of oil. Nada. Zilch. Zip. Gone. Stellar timing, eh? Fun. December. In a matter of weeks, we’ll hit the full year mark. Ta-da! Here we are! Still together. Still plugging along. And yet, the coffers are empty. hellloooooooooooo…. that’s the sound of an empty well.

What now? Hell if I know. I feel like laughing. Is it manic laughter, dancing on the slick sharp edge of panic? Maybe. Is it softly humorous, scoffing at the hubbub of this mortal game we play? Maybe, when I imagine myself as cool. I’m not. Cool, that is. I’m a grapefruit- far from cool.

The December bills are paid, and January? Well, who knows. I scoff at January. No, that’s a lie. I don’t scoff at much of anything now. I take a deep breath, square my shoulders, and carry on.  I’m so used to hanging out on the end of this rope, I can’t even remember what terra firma feels like. When we eventually find land, I imagine my floaty feet will play tricks on my brain- like taking off your skates after a long afternnon at the rink and being confused by the static of the non-ice ground.

Well, for now, December is taken care of- January weeks away, and we’ll think of something. We have  ton of credit cards we haven’t touched- hey, yeah, maybe that’s a good idea! If we’re really irresponsible, maybe we can get a bail-out!

(*shaking head and wandering off aimlessly to bed*)

So this afternoon, David and I decided to walk together to the bus stop to pick up Beanie. It’s crisp and cool here, and we were both feeling a little overwhelmed after discussing finances. The cold air would be good, and we could hold hands and pretend everything is fine for a few minutes. We told Jeffrey we’d be right back, and headed four houses up the street to stand on the corner and wait for the bus.

The bus was late. Like 10 minutes late, but we did enjoy being alone for those 10 minutes. We don’t get much alone time these days, and it was nice. We could see the house the whole time, and Jeffrey and Abby were both watching a cartoon when we left. What could go wrong, right? Right.

Bean got off the bus, we walked home, Bean and Jeff were playing in the living room, and I was muddling around in the kitchen. David called me from the stairs- and when he calls me “Tracy”, I know something very not good is happening. When I got upstairs, this is what I saw: 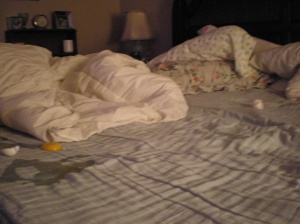 What is that? Aside from a very unmade bed… Let’s look closer, shall we?