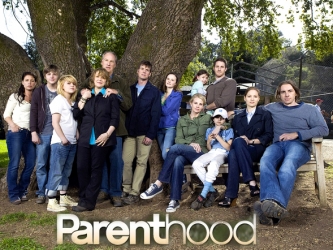 After the fifth person emailed me and said I HAD to watch this new show on NBC, I finally caved and pulled it up on my laptop.

Episode One: We meet the Braverman family based in the East Bay area- more precisely the Oakland/Berkeley hills- judging by their house and my own familiarity with the area. (You don’t get digs like that in the bay area without some serious cash.) So it’s another series about an affluent white family, with their share of problems.

Whether this is good or meaningless, I can’t say, but I can relate. I grew up in the area, and I know them, and their problems are mine. And in this case, it’s truer and closer to home than I care to admit.

The four adult children- Adam, Sarah, Julia and Crosby- and their families are the center of the series. Sarah, played by Lauren Graham, is an artist and mother of two, divorcing her do-nothing drug-addict husband, and trying to find her footing. She is packing up her home and moving back to her parent’s, at the urging of her brother Adam. Adam is a responsible business man and general nice guy, but he is struggling with coming to terms with a son who is diagnosed with Asperger’s syndrome in the first episode. Julia is a corporate lawyer and plagued with guilt at not being the mom she feels she should be, but really doesn’t want to give up her career. Her husband stays at home and has the primary relationship with their daughter. Crosby is a layabout youngest brother with commitment issues, and is a walking stereotype.

The pilot was filmed on location in Berkeley, but the remainder of the series will be shot in LA. Which is too bad, but no one asked me- the sunlight in the bay area is undupliacatable. Just my two cents.

Episode one was like a raw flaming arrow through my heart. 38 year old Sarah is forced to move home with her teen children after her marriage to a drug-addict musician goes down in sputtering ashes. She is humiliated, grieving, angry and sad, all while trying to be the best mom she can figure out how to be. The tension with her parents, despite the obvious love between them, is spot-on. Her siblings want her to date, but her one dating adventure crashes goes supernova with her role as a mother when her son walks in on her date. She has to rescue her son from his heartwrenching attempt to get his to father, ending with a tear-jerking scene at a rainy gas-station where she tells him “You deserve a dad who loves you. You do. I may not be enough, but I’m all you’ve got, and I’m not going anywhere.”

Adam and his wife have an 8 year old son who wears a pirate costume everywhere and has trouble in social situations. After a gut-wrenching scene at school where he is trying to cut paper hearts and cannot make the scissors work, he bites a classmate in panic and frustration. He is diagnosed with Aspergers. He is kicked out of his school, and his parents begin trying to figure out how to handle and help him.

I’m less interested in Julia and Crosby’s storylines, for obvious reasons. They both come off as more of facets or stereotypes than full characters- but it’s early still.

After episode 2, I’m a little disappointed in how they are handling the Aspergers- but maybe that’s because they’re parked in my driveway. Nevermind that a child wouldn’t make it to 8 without someone noticing something was wrong and he needed help. I suppose it must happen, but this floors me- especially with affluent, educated and involved parents. The child actor is a little too expressive in his voice, and they are taking the over-the-top method portrayal. The parents are being very melodramatic and treating it like a death sentence, which it undoubtably is not. I am holding out hope this is just character development, and they might move on in a less bombastic way.

{addendum: It’s been pointed out to me by several reputable sources that the parents’ reaction to the Aspergers diagnosis is actually pretty common and normal; it’s my reaction that’s atypical. Very interesting. It also means the show is doing their homework and not just talking to me. Here I was thinking I was normal… }

Sarah is trying to land a job after 15 years out of her field (graphic design) and has to answer questions about what she’s been doing with her life and talent for the last decade and a half. Her work is good, but she doesn’t have a college degree so she can’t get anyone to hire her. Meanwhile, her kids are struggling to assimilate at a new high school and her daughter might have to repeat a grade.

So… I’m willing to hang in there and give it a chance to mellow and mature. Tone down the stereotypes and high-drama. The bones are good. The premise is, um, relatable? Yeah. Ya think?

Now I just want my cut of the writer’s pay because they’ve obviously been mining blogs for material.

17 thoughts on “Parenthood: What I Think So Far”