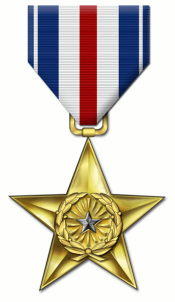 My grandpa would be ticked at me for showing this array, but what you are looking at is part of what you  honor when you celebrate Memorial Day today. These are the medals earned by my grandfather, Captain Jack McKay, during his career in the United States Army. From the sandy and bloodied beaches of Normandy in June of 1945 where he led his men ashore, to patrols into occupied enemy territory in France, to being given credit by his superior officers with being the first American soldier to set foot on German soil, these are the honors accorded a soldier. Yes, there are really five Purple Heart medals. That is not an error.

For any longtime readers of Dandelion, you know that my grandpa Jack died when I was pregnant with Abigail, and I was unable to fly to Washington DC for his funeral at Arlington National Cemetery. He was buried with all the honor accorded a soldier of his caliber, and his final resting place is now marked by the same simple white marker that names every other in that vast memorial.  It is only fitting and proper.

Because men like my grandpa were willing to set aside their own fears and aspirations for their lives and fight for something greater than themselves, countless people the world over live in freedom. There are still men and women, soldiers, who lay their lives on the line every hour of every day to protect our lives and liberties. Indeed, life and liberty is so precious and so valued that our soldiers are willing to fight to the far corners of the world to secure these precious ideals for people of other nations, faiths and creeds. No greater honor, indeed.

Today, wherever you may be, take a moment to stop and think. Pause in your grilling, or your picnicking by the lake, or your mowing of the lawn, and say a prayer or lift your heart in gratitude for those who came before you, and perhaps teach your children a little bit about whose shoulders we stand on each and every day. The mighty, the strong, the selfless, the brave. Don’t forget them.

Here’s a tribute I wrote to him when he died.