School starts a week from today, and I just got the pool passes for the summer from the management company. Finally. My lease was signed in MAY. Way to be on top of things, peeps! We should get in maybe one… two… swims, before they close for the season!

Mosquito bites suck. It’s not even worth being outside at twilight when the bloodsucking thieves come out.  I claw at myself for days, looking hot and pockmarked in the process. Awww yeah.

Cicada season seems to be ending here too- the incessant droning humm of their song is quieter, and I’ve found several of them dead in the yard. Abby is fascinated and has put them in her bug jar; the boys have run away.

Jeffrey will be eleven tomorrow. ELEVEN. Y’all have been reading about this kid, if you’ve been around here that long, since he was three. He’s tripled in size!

Have picked up some more freelance work for the fall- it’s on a wing and a prayer, but I love having freedom and flexibility. I think I can parse it together until school starts in January.

Speaking of grad school, I have a meeting set up with my department chair to talk about research and direction. I kept pinching myself yesterday, not believing it’s really real. Or maybe I was scratching mosquito bites…? Holy crap, someone wants to talk to ME about RESEARCH and direction I want to go! How did this happen?! >squee!<

Tomorrow I’m making a Lego cake. Again. Only this time, Jeffrey has requested no fondant, just chocolate icing. So, this cake, instead of red, yellow and blue, will be the elusive and rare brown Lego 8-brick.

Two packages have come from family members, shipped from Scotland. I wonder what they contain? Is the world ready for an eleven-year old red-headed kilted bagpiper? Ready or not…

I have a ton of family getting married this year- only all the weddings are in California. It’s near certain I won’t be able to fly out. That’s all I’ll say about that.

Oh! Good news! Auntie Heather is expecting her first baby! And we now live close enough that I can drive to see her and her awesome family. I just have to avoid the bats, right? I wonder how long my rabies shots are good for…

Every once in a while, I miss the old house so much it hurts. I know the dangers of nostalgia, and I know the pretty-outside only hid something that was gone on the inside. But boy… it sure did look pretty while it lasted… 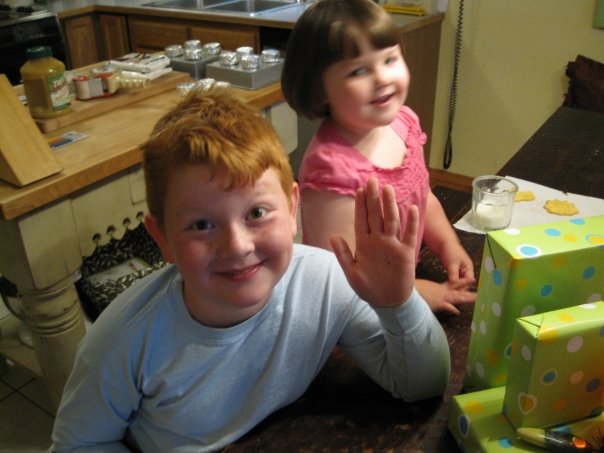 Then I look at them now, at our lives now, and think… maybe this is pretty danm good too. I’m pretty sure I will look back on the sweetness of now with longing and tenderness and know that we have chosen the good part— no matter when or where we are.

David spent a fair amount of his life with folks mislabeling and misunderstanding him. His internal life did not match what people projected on him—and he would laugh about the foolishness of preconceptions. He was a light, he was the single most spiritually gifted and sensitive person I have ever known. He was a gift to me and our children, despite earthly frailties. He was a tender and incredibly devoted father. He died six years ago today, and it’s still difficult to process the loss. I still reach for the phone to call him, to ask his opinion or guidance, and it still aches when I remember he is gone from us. We feel his absence every day.