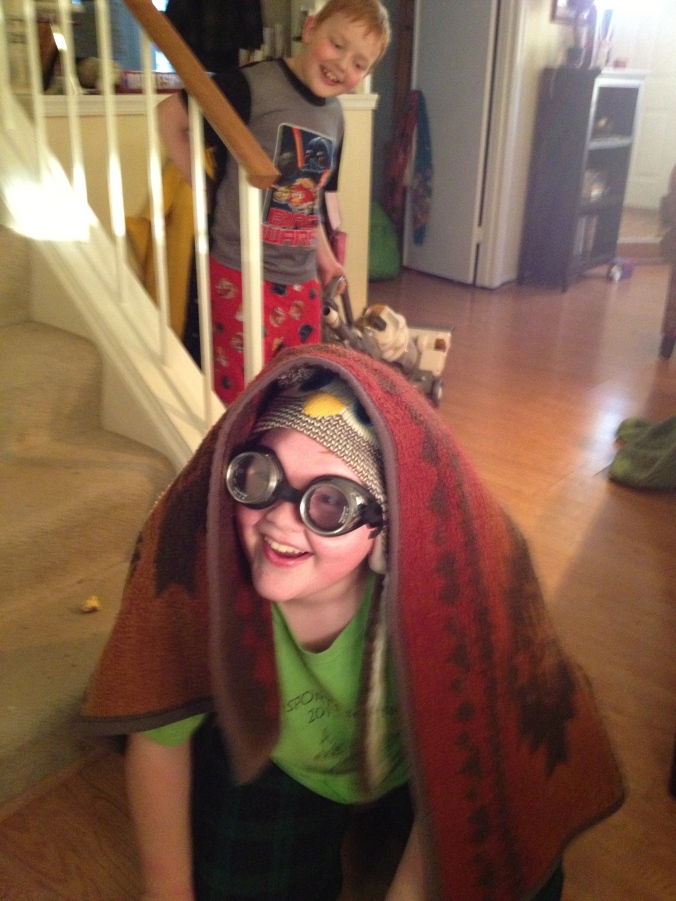 Turns out the snow day wasn’t so bad. The kids had a no-screen day, and after the initial griping and moaning, they invented several games and amused themselves with absolutely no fighting, no complaining, and no bugging mom while she worked. I’m unclear what’s happening in this picture, but they’re laughing, so… WIN!

The heater went out last night. It was <20 degrees. I was standing in the kitchen, and realized I was dang cold- had been slowly getting colder all day, but I kind of (lame) thought I was just getting sick or something. But nope… no heat. Mercifully, I have great landlords— they’re easy to reach, and they respond promptly. I bundled the kids up and we pretended we were pioneers. What else is a Mormon supposed to do when it’s cold besides play pioneer?

Testing a new recipe for enchiladas today- if it tastes as good as it smells, I’ll be sharing with y’all in the next few days. Below is a chunk of the browned beef roast that’s currently simmering with the homemade enchilada sauce in my dutch oven. Soon it will fall to pieces, I will strain the sauce, make some tortillas, and return and report. Drrroooool.

I’ve been watching The Tudors on Netflix at night after the chickens are asleep. Two thoughts: the cinematography is breathtakingly spectacular… every. single. shot is set up like a Dutch painting. I sit there with my mouth agape sometimes. The other thought? Man, Henry VIII was a giant a**hole! Still, totally worth watching.

Only two week until Walking Dead starts up again! Woohoo! (it’s kind of provincial and sweet that the chaos of my life has settled down enough that I can be excited about something on TV again. It’s been years…)

Bean got some tracing paper, and is currently working on the covers of his books. This requires no one go near him, touch him, or talk to him. lest his concentration be ruined and the entire process thwarted. He’s got a bit of his mama’s artist heart, methinks…