“If your daily life seems poor, do not blame it; blame yourself that you are not poet enough to call forth its riches.”–Rilke

This is my current favorite photo of Bean. He wears shooting-range ear-protection in church, and it keeps him happy. He also is dressing like Number Eleven all the time, for you Whovians.

Well, it appears I brought Washington state with me to Washington DC. This April pretty much compares lockstep with what the inland northwest expects of spring: cold and dreary. We’re a good ten degrees below average for the year. They’ve had to put off the Cherry Blossom Festival in DC twice now… because there are no cherry blossoms.

This is how I found Abby the other night when I went to tuck her in. Sound asleep.

In news of the gross, evidentially this is the spring for the 17 year cycle of the cicada. According to National Geographic and the Smithsonian, in a few short weeks the little disgusting bastards will be crawling out of the ground in swarms (millions of them!) like little zombie bugs, to shed, molt, mate and die. I can barely think about it— I shudder in revulsion. The tiniest glimmer of hope is that it only lasts about 4-5 weeks. But you’ll find me hiding under the bed during all of May.

I’m neck-deep in a fight with the school district right now over IEPs and BIPs and making sure protocol is followed. There is a fair amount of what looks like CYA behavior, and I’m pretty much on the warpath. Not at liberty to say more right now, but will write it all up as soon as I can. Also, to any educators out there- when dealing with a parent, learn her name. Using the generic “Mom” when referring to her is unprofessional and disrespectful, unless you’re in the odd position of writing an IEP for your actual mother.

General Conference is something I look forward to. Always have. But today was awful. Sometimes—no, often— platitudes and hyperbole and binary thinking push a person away rather than draw them closer to God. Being a divorced mother of three, a convert, a grad student, and… well… me… makes makes it difficult. I will seek for the good, and note Henry B Eyring and Richard G Scott both gave sermons I found valuable.

Speaking of Conference, my children enjoyed themselves- per normal. For this weekend, twice a year, I let them drag everything into the main room and build, while we all hang out. We had a picnic lunch on the floor, and they got treats for paying attention to talks. Unfortunately, I chose “vacuum” as the word of the day… 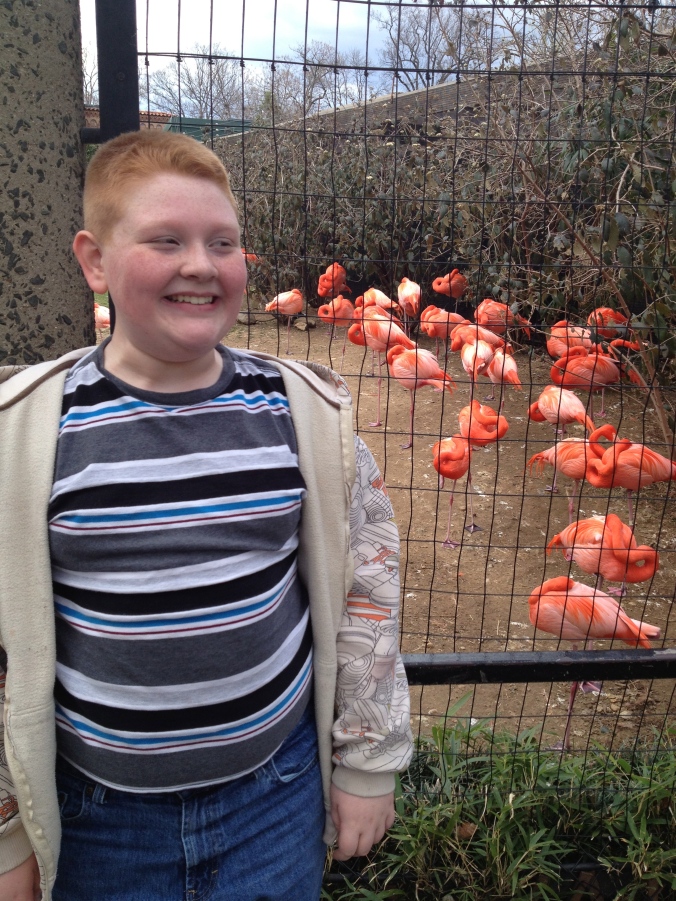 Spent last weekend at the Smithsonian National Zoo. Super cool. I wish the camera had captured how incredibly ORANGE these flamingos were. Jeff liked them better than the Panda exhibit, and Bean was much more excited about the wild birds flying around than anything in a cage.

Speaking of some good news, when I was in Seattle a few weeks ago for Mo’s wedding (awesome even that it was) I got to spend the day with my brother and his new fiance. They’re getting married this fall, and I couldn’t be happier for both of them- she’s darling, and he’s super happy. Winning combination.

Auntie Heather came to visit us on Easter!! We looooove us some Auntie Heather, and not only was she our Easter surprise, but she brought her awesome husband and her even more awesomer new baby, James! It’s the first Easter in, quite literally, years that we’ve had family, and I really enjoyed having the house full again. James is darling, of course, and I got some baby snuggles in, but my kids seriously were in love.

I guess that’s about it for now.

5 thoughts on “Random Crap: So This Is April”

A perfect day off.