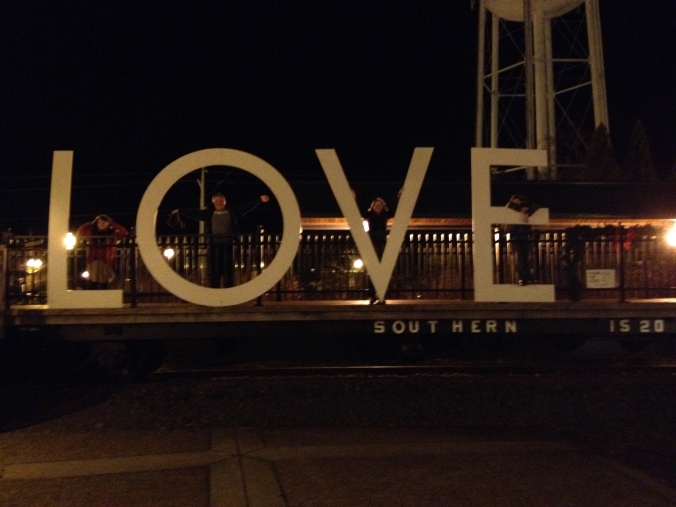 For the last ten days, my ex-husband has been here. Yes, here, at my house. At my house with me, my three kids, my wonderful new husband, and his kids visiting for dinner. This folks, is an iteration of Modern Family.

It’s been a little surprising how many people have expressed discomfort or even shock that we would welcome my ex-husband into our home. I’ve talked about this with Jon, and with my ex-husband, and with my mom- we all kind of shrugged and looked bemused at each other. David and I have been divorced for five years. But even before that much time, I tried everything humanly possible to let him be a healthy part of the kids’ lives. Once he had fulfilled what the courts asked of him, I made a point of meeting him halfway on every effort he made. It wasn’t (and still isn’t) about me- it’s about three kids whose lives were irrevocably changed, and my (our) responsibility to those children.

No matter how good a mother I am, no matter how good a step-father Jon is (and he’s fantastic), there is a space in my kids’ collective hearts that cannot be filled by anyone but their father. I owe it to my children to do everything I can to give them access to that space. My life didn’t go how I had hoped it would. So what? I could have held onto bitterness and resentment, punishing David for being the vehicle that crashed into my dreams- but ultimately that would have harmed me, and eventually crippled me. I would have been left allowing the actions of another to define the contours of my life. The story of my divorce would have been the story of who I am.

The thing is, when you hold onto bitterness, resentment and anger, it corrodes you from the inside out. When you constantly pick at wounds and scabs, you’re harming yourself, scarring your body and mind far more deeply than the original cut. This is why forgiveness is so vital. Forgiveness isn’t about telling the person who hurt you that it’s all good— forgiveness is about acknowledging something painful happened, that people hurt each other, that misunderstandings happen, that we are all fallen and in living life, we will both cause and receive hurt. Forgiveness is saying “I will not allow things past to define my future.”

One of the hardest things I have had to do is welcoming David into Little House for the holidays the first year after our divorce. It didn’t matter at all that I was still angry, that I was still smarting and hurt. What mattered was he was willing, and my kids needed to see their father. He didn’t have a place to visit with them, and instead of punishing him (and my kids) for that, I opened my door to him and had him for dinner. Then, after dinner, I stepped out for a few hours to run some errands and let him stay at my home with my kids.

Cut to this week.

It had been more than two years since my kids had seen their father. When he finally called and said he was ready to visit, I didn’t focus on what he hadn’t done- I was happy for my kids that they would get to see him. We set the guest room up, bought him some Coke Classic, and went to the airport. It was a quiet week, with a few side trips to see some DC museums and sights, but mostly he just hung out at home with the kids, playing games and watching movies. He and Jon got along fine, and they watched Monday Night Football and a few games of the World Series together after the kids were in bed.  They’re not going to be fast friends, but there is a mutual respect. David is humble- he knows how fortunate the kids are, and he shows gratitude for me and how I’ve parented, for Jon and how he loves us, and for the kids and their forgiving hearts.

The kids got to see all three of their parents acting like parents, and they blossomed under that love. They saw their father show up, and do what he could. They saw their step-dad welcome their father into their home. They saw us all laugh and joke and tell family stories. They experienced a big family table composed in ways not previously imagined, but overflowing with safety and comfort. They know their home is a place of love.

If you have an ex-spouse over whom you are nurturing resentment and anger, over whom you are allowing lack of forgiveness to define your new life, please step back and shift your perspective. If your ex-spouse loves your kids, honors responsibilities, and shows up— it’s time to get over yourself. Spouses divorce each other- they do not divorce the kids. Had I allowed my anger to control my children’s access to and perception of their father,  I would have been accountable. I would someday have had to stand before them and explain why I privileged my passing bitter feelings as more important than their relationship with the father. That is not mine to violate. I couldn’t do that. Not ever. Allow the other parent to be a parent, and do so without hating them for how they disappointed you. That has nothing to do with the kids.

No matter how well you think you’re hiding it, if you haven’t forgiven, if you are saturated in blame and anger, the kids know it. They can see it and they can feel it. If you can’t forgive for yourself (I know that space- it can take time, but the effort is so worth it.) do so for your kids. Eventually you will start to believe you’re worth healing, and then miracles can and do happen.