k. Like, really sick. Like, sicker than I’ve been in years. My allergies and asthma have been under control for so long, I sometimes forget what it’s like to not be able to breathe- then BAM, I get knocked on my butt by a winter cold that settles in and sets up camp in my lungs. Nebulizer treatments for the first time in years and years, prednisone, antibiotics… oh my. So I’ve been holed up at home, and trying to keep from cracking a rib from coughing. That’s not hyperbole.

Then we got snow. And in a bizarre move that made no sense— perhaps an overcorrection for the endless snow days last year— the district didn’t call off classes. I took one look out the window and told the kids to stay in their jammies. No way was I sending out in that. Then we watched twitter explode as local politicians and school board members pointed their fingers at each other while busses slid off the roads all over the county. We made hot chocolate and watched Firefly.

I did give Jeffrey a job for the day- in the spirit of my trying to learn more, I figured if he was missing a day of school, he could learn something too. I told him he had to find a recipe, read it, figure out if we had the ingredients, and then prepare it. I would be available to consult and answer questions, but I wanted him to be the chef and make the calls.

He camped out with my laptop for a bit, and arrived at The Pioneer Woman’s Perfect Potato Soup. Her recipes are always always always a good bet, and we had almost all of the ingredients. I encouraged him to give it shot. He got to work. I curled up on the couch and tried to hold very still.

Bean and Abby played games and colored and built things with Lego. Jeffrey donned Jon’s new apron and got to work. Yes, my husband has an apron. And his sister made it for him. So much awesome. 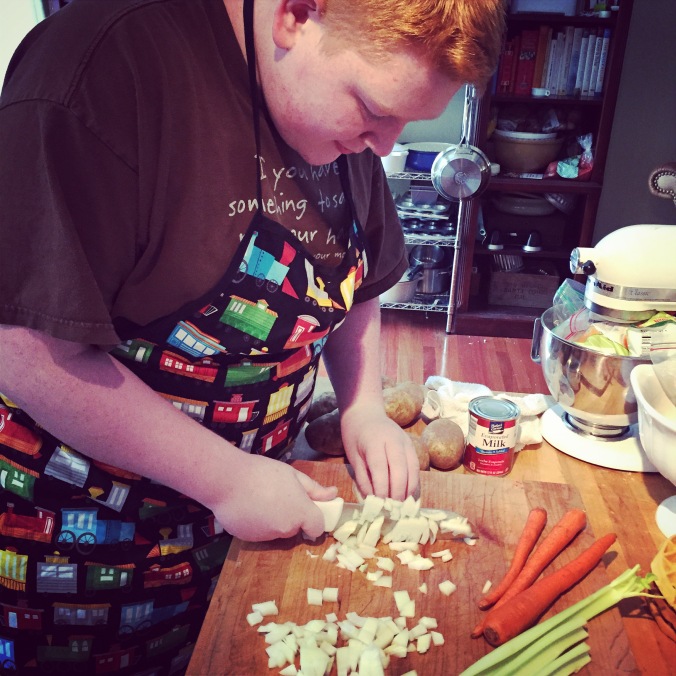 This is so much better than being in Social Studies, Mom!

It took Jeff a while and the kitchen was a disaster when he was done, but the soup came out, just as Ree says, perfectly. He made it with gluten flour so I didn’t taste it, but it got devoured. Bean ate English muffins with peanut butter. Some things are as dependable as the sun rising in the east…

Later that afternoon (it never got above freezing and nothing melted) Abby managed to build a snowman. She named him Tom.

I’m going back to bed now.

5 thoughts on “Learning: Raising a Cook”