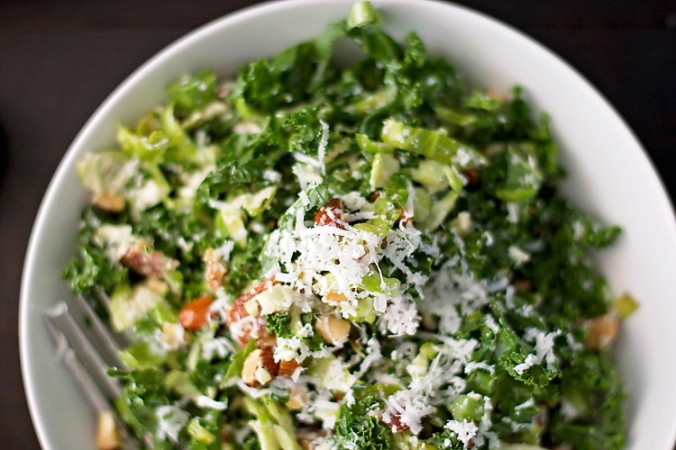 Make the vinaigrette in a jar with a tightly-fitted lid. Combine all ingredients in the jar, and shake vigorously- the mustard creates an emulsion, and despite it being an acid/oil dressing, it generally will not separate when stored in the refrigerator. This vinaigrette is more than needed for this recipe, and is lovely on salads as well. Set aside to chill.

In a large saute pan, crisp up the two slices of bacon. Remove cooked bacon from pan and drain on paper towels. With the pan still hot and containing the bacon grease, add entire pile of kale and brussels sprouts. It will be a lot for the pan, but they will cook and soften quickly. Toss and turn gently with tongs for 1-2 minutes— you just want it lightly wilted— then remove to a salad bowl. Add the crumbled bacon, almonds, and parmesan cheese, and toss with 2 Tbsp of the prepared vinaigrette.

Prepare to be amazed. I could eat this every day, it’s so ridiculously good.