Monday night, Jeffrey, the ginger man-child in whom we are greatly pleased, played his baritone tuba with his middle middle school band for the China-America Youth Music Performance at the Kennedy Center in Washington DC. That’s a mouthful. And it was pretty freaking amazing.

Jeffrey’s entire middle school music program was selected to take part in the cultural exchange sponsored by the China Arts Education Federation. Children from China come Washington DC to take part in sharing of the arts. There was music, dance, vocal performances, theater- both from Chinese children and American children, all packed in one exuberant and exciting night. 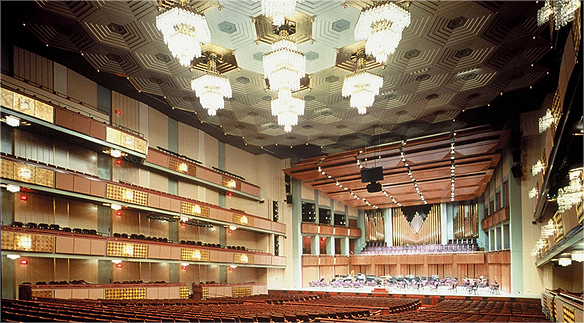 The whole building is amazing. I’m not sure how, but we managed to get fantastic seats- only about eight rows back from the stage, on the left. The Concert Hall is enormous, and has hosted people you’ve heard of and just about every head of state and president since it was built.

The kids rode busses into DC in the morning, and the parents (and siblings) trailed later in the afternoon, as they got ready to perform. I pulled Bean and Abby out of school early, and we swung by Jon’s office before we headed across the river. The Kennedy Center is right on the Potomac River, just to the northwest of the National Mall and the Lincoln Memorial.

When you walk in, you can either enter through the Hall of States, or the Hall of Nations. Abby and Bean both tried to identify as many flags as possible, before a nice docent gave Abby a list of all the flags.

It truly is an enormous place- and the mid-century design is appreciably intact. It’s just so over the top and wonderful. While we waited for Jon to park the car and for Karen to join us, we manage to get our tickets from Will-Call and find Jeffrey. Bean was jumping out of his skin by this point, and barreled into the group of musicians to give Jeffrey a Bean-hug. Keeping Bean calm in public situation like this is always a challenge, so we spent time outside looking at the river, waiting as long as possible before taking our seats.

We were able to watch Jeffrey’s class line up, and since they were the very first performers, we knew it was time to head inside. (Bean did fairly well. I’m still kicking myself for forgetting his shooting-range ear-phones. It would have helped him a lot.)

The performances were great- all the way through. The kids, all of them, showed a level of discipline and love for the arts that was visible. I’ll put a YouTube video Jon took of one of the two songs Jeffrey played. It was kind of cool he got to go first, because his nerves were shot and they all got to enjoy the rest of the production from the balconies, which had been reserved for the kids.

A pretty amazing opportunity. And now my kid has played the same stage where Ann and Nancy Heart played the hell out of Led Zeppelin for Robert Plant, Jimmy Page, David Letterman, and the President of the United States. (There’s a Senator or two over my shoulder in the blurred shot- Jon was trying to be sneaky) 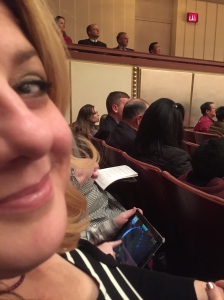 3 thoughts on “Pretty Awesome Night at the Kennedy Center”

Anyone who follows me on Twitter knows a little about my thrift store vintage magic. I’ve been struggling and after a year at home, I’m finally venturing out again. I gave myself a couple of desperately needed hours off and went treasure hunting. And I found some amazing things, including this 100-year old frame I hope will hold my law degree, a California poppy pitcher, and a vintage hand-crocheted granny squares blanket. I’m feeling better and ready to get back to work.