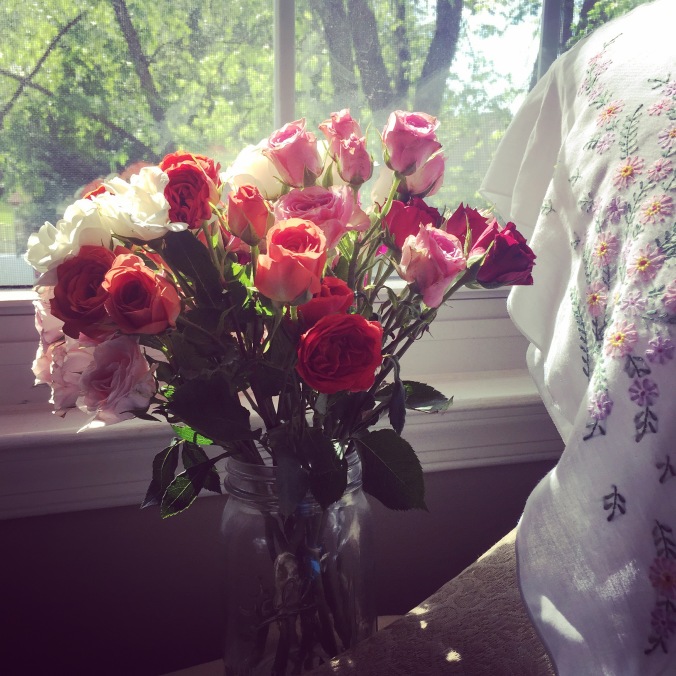 Where to even begin? The silence has stretched out now for months, and it’s not just been a silence in writing, it’s been an odd and interesting imposed silence in my mind, too.

In my interactions with- and in my ways of moving through the world- my silence is a pretty accurate gauge of how important or big my current processing is. This applies to the happy, as well as to the terrifying. When things with David were disintegrating, I alluded to it, but it wasn’t until the dam broke and I couldn’t keep it together any longer than I started talking openly about the pain. When I was dating Jon and I knew this happiness was different and he was Important, I didn’t say a word publicly. The same with this spring, when I had a very scary scare of scariness.

Because I cannot handle suspense and I read the spoilers first: I am fine now.

Because medical stuff is just not that interesting, the Reader’s Digest Condensed Version: During routine testing, some “abnormalities” were found in my stomach and on one of my lungs. I like both those organs, and you get lightheaded and woozy when you hear words like “dense spot” and “pre-cancerous.” I underwent more tests than I knew existed, and thanks to amazing doctors and fancy magnetic machines, we got super-detailed results. It’s awesome modern medicine can check in such detail without being invasive- however, it turns out, sometimes those pictures do show when it’s time to actually get invasive. Lucky me.

In May, I had surgery. Afterwards, all my pathology came back clear. No more abnormalities, everything was healthy. Yay!! I’ve been recovering and healing ever since, and I’m just about good as new. Really. See? Ignore the teenage zombie in the background.

So that’s really just a long way of telling you *why* Jon moved heaven and earth to get us Hamilton tickets in New York in early May. As I’m heartbreakingly watching the turnover at the Richard Rodgers, I’m even more amazed that we pulled it off, and that we got to see all the original principals.

The world is pretty scary right now, isn’t it? I don’t know how many times our hearts can break. I feel helpless and frightened, and then I find threads of hope, and I hear Mr. Rogers saying “Look for the helpers…” and then I wonder how many times are we going to do this to each other? as the unanswered symphony of “why?” echoes out into the universe. Our capacity to hurt each other is ghastly, but then, our capacity to heal, lift up, and to change is the balm and hope for the future. We can do better. I know I cannot solve the aching of the world- no one can. But I have committed to doing better in my own small life. I will be kinder. I will reach out to the actual humans I encounter in my life. I will be more aware of iniquity and racism. I will speak up. I will try really hard to challenge my comfort zone. I will teach my children. I will lift where I stand, and I will do it better and more consistently. I don’t know what else to do, because being paralyzed with fear isn’t working.

We had a giant tree in our backyard bust itself lose from the earth early one Saturday morning, and take a flailing trip over the fence and into our neighbor’s house. Thankfully no one was hurt, and our neighbors are super cool people who happen to have the same home-owners insurance as we do. Made the process of cleanup much easier and simpler. Bean was beside himself with giddiness when the arborists arrived with the chipping machine. Even more fascinating were the guys who loop the ropes over the tall branches and string themselves 30 feet up while swinging chainsaws. They earned their money. Now the south side of our house gets a whole lot more sun. Thinking about a garden, then I think… nah.

Tiberius, now 160 pounds, celebrated his first birthday. Well, he didn’t give a flying bat, but the kids froze a hamburger patty in a block of ice and gave it to him on the front lawn. All were happy- but they forgot to take the ice out of the Tupperware, and so Ty also had a Tupperware snack along with his meat popsicle. We aren’t telling him about his Very Special visit to the vet next month. He’s going to be a load of fun in the Cone of Shame.

Jon and I celebrated our 2nd anniversary, but it honestly feels more like a lifetime. Everyone’s favorite evil uncle Willy came to visit for a week, and that was awesome. Stephen graduated from high school, and we’re pretty proud of him. He’s an aspiring writer, so his story is not mine to tell.

Abby has some news. After batting around the idea for years, and always feeling the time just wasn’t quite right, we are finally letting the schools advance her a grade. She’s moving from 4th grade to 6th grade this fall. She’ll be at the same school as Bean, and he’s super excited. They can ride their bikes every day, and while they’re two and a half years apart in age, they’ll only be one grade apart in school. Neither of them are remotely bothered by this fact. I’m hoping being able to take pre-algebra and earth science and a music class will all help Abby be challenged by school again. It’s been a long time.

Also? She cut her braids off! Big changes for the youngest among us.

Bean has been on a growth tear. He’s suddenly decided he wants to try new foods, and he’s very specific and determined. Don’t get me wrong- English muffins with peanut butter are still the predominant staple. However, he seems to have noticed other people eat other things, and he’s been curious. He recently announced he wanted to try Chipotle, since Jeffrey likes that food. He said he didn’t want it little kid style, but with all the stuff “regular people” get on their food. You cannot overstate how quickly we got everyone out the door and to Chipotle. He ordered a carnitas quesadilla, ate 1/3 of it, and said “It wasn’t horrible. I didn’t gag.” High praise indeed from Bean.

On July 4th, he ate FOUR ears of corn on the cob. I think the joy might have stemmed from the little corn-stabbers I got him, but either way- a fresh vegetable! It only took 12 years. 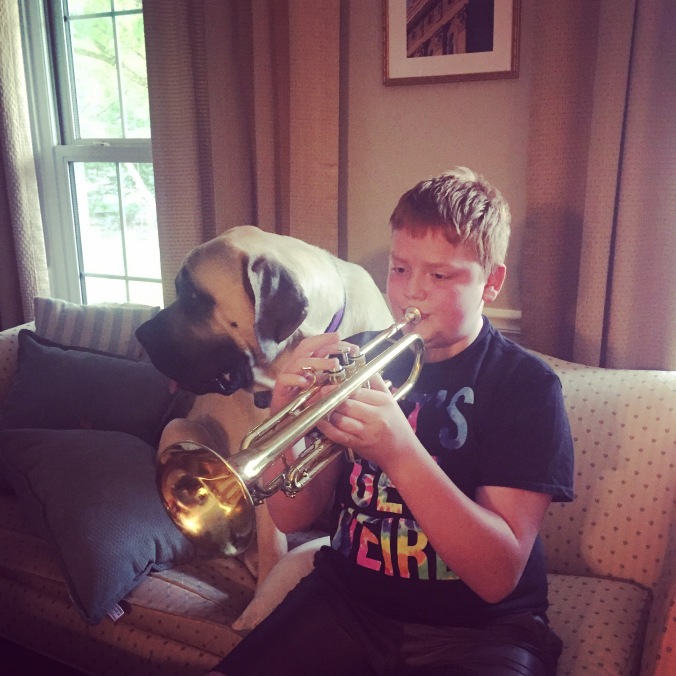 Jeffrey has become consumed with football. Honestly, I didn’t really expect him to be so passionate about it- it’s a ton of really, really hard work. He’s been at practice every day this summer- it’s not “official” practice- that doesn’t start until August, but the coaches hold clinics all summer, and he’s not missed a single one. I don’t make him, I don’t wake him up- this is a 14 year-old kid who willingly gets up during his summer vacation and goes to practice in the dirt and heat for 3 hours every weekday. That’s some dedication, and I’m pleasantly surprised at his determination.

Oh, he also had tubes put in his ears a couple weeks ago. The difference is *amazing*. He can actually hear now! Turns out he wasn’t just ignoring us- his timpanic membrane wasn’t flexing properly, and now it’s like a miracle. His first comment? “Wow, the toilet flushing is SO LOUD!”

As the seasons are changing in our family, Jon suggested I take the tiniest bedroom, now vacated by Stephen who heads to college this fall, and make it a home office. It really is a tiny room, barely big enough for a twin bed width-wise. None of the other kids wanted it- apparently they like sharing space. Lucky me! So Jon and I have spent the last week or so cleaning out, sorting, storing, donating and painting, and I now have a room where I can write.

I wanted to make it inviting and comfortable- I can close the door when it’s time for serious work, but so far, the kids and Jon and the dog all filter in and out, and the big comfy chair I drug in is constantly holding someone. More impromptu conversations and laughter have happened in the last week than during the whole rest of the summer. I think this is going to be everyone’s favorite room.

My thrift-store mojo seems to have returned- I found four new second-hand bookcases, and I suddenly have the problem of not enough books! Frankly, there are at least 14 bookcases in our house- is that normal? I don’t know. But I get to hit the used book store and not feel guilty because book shelves don’t need fluffers, they need books! Back to my point, I found a gorgeous petite glass-fronted antique book cabinet at the Salvation Army for $100. I have named her Wallace, and she is in the corner of my office, now holding my precious antique books, where they will be safe from dust and dog slobber.

Long ago, Crazy Chicken Annie told me to make sure I surrounded myself in life with only things that mattered deeply to me. She said it would change how I moved through my home and the world if I didn’t have stuff just to have it, but to keep and truly love the things in my environment. She was right, by the way. I have been refining this notion for years, and in the office I have really enforced it.

I very carefully curated everything I brought in- each book had to be a book I had read and loved. Each item was weighed and judged. And it makes a difference. On the shelves are my grandmother’s button box, Charlotte’s mother’s knitting basket, a rock from the Pit River in California where I last camped with my dad, a wooden toy I bought in Germany before I had children, now almost Velveteen-Rabbit-level loved. I have my own box of precious letters and cards, a flower Marissa gave me years ago, an oil-painting of a chick by my dear friend Annie, my great-grandmother Hattie’s creamer, a picture of my mom holding me when I was a baby, and of my dad dipping my toes in the Pacific when I was two years old. Ticking importantly on my desk is the Big Ben wind-up alarm clock that sat on my grandma’s nightstand forever. There is David’s crystal ball, right next to sealing pictures of us with our family through Jon. It’s everything.

I’ll just leave you with this picture in closing, because seriously. We couldn’t find him. We still don’t know if he’s responsible for the wheelbarrow of pink flamingoes.