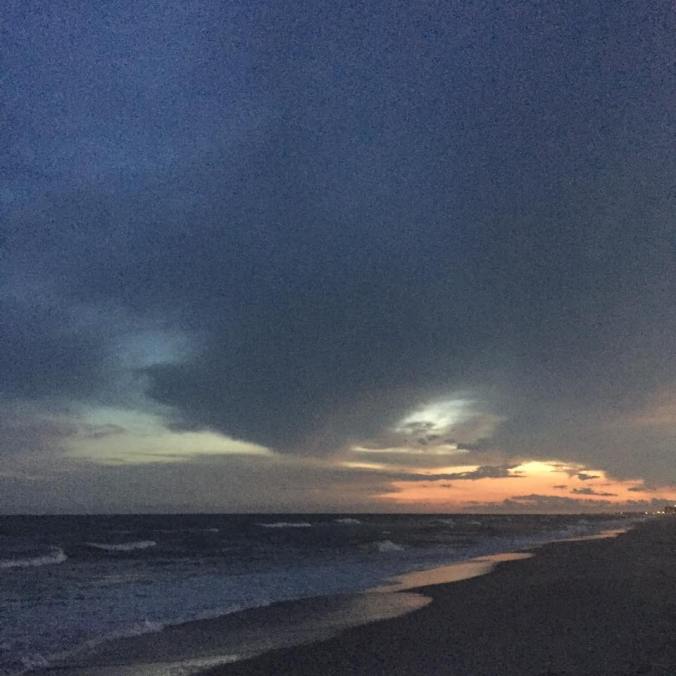 It was near dark, and she wondered if it was just smarter to wait until morning to walk down to the beach with the kids. They’d been to the beach before, but they had no memory of the icy Pacific with her dad, years before in their toddlerhood. She’d spent most of the day driving south, watching the land change from the hard red clay of Virginia to the pines and soft grass of the low-country, while pointing out the draping, grey Spanish moss and waxing poetic about Carolina barbecue.

Travel was a double-edged sword for a kid with autism. Her other kids were pros at buffering and helping, and the trip had been largely uneventful, but the moon was well over the horizon when they finally unloaded the car and traipsed up the stairs to their  room. Her daughter pointed out the moon wasn’t actually full, but waxing gibbous, and she wryly contemplated of how proud her father would have been. (She quickly looked up ‘waxing gibbous’ on her phone, and her daughter was right- for that night, the moon was 97% waxing gibbous. Of course.)

Screw conventionality and dinner. She told the kids to get their flip-flops on, they were going to the beach.

Crunching over the sand of the boardwalk bridge that carried them to soft sand, the crash of the waves grew louder, and she caught a glimpse of the wide steel-grey level that was the horizon. Her heart leapt. How could she so easily forget how important this is to her? She grew up on California beaches, where the water was icy cold,  and the undertow fierce. But as soon as she tasted the salt on her lips, she was home.

The kids stepped gingerly on the soft sand, and laughed with joy. “Take your shoes off.” she suggested, and reached down to pick up her own sandals. The sand was powdered-sugar fine and already cooling in the night air. She smiled at the exclamations of delight as the kids set their feet tenderly on the unfamiliar ground. The full(ish— she reminded herself) moon lit the deserted beach and sparkled on the dark water.

They walked towards the water, her son with autism, usually hesitant about new sensations, was effervescent with excitement. His smile lit up his face and he couldn’t tear his eyes from the waves- he dropped his shoes and ran straight towards the sea. Fighting back a moment of panic, she bit her tongue, and let him go. Fully clothed, he ran straight into the Atlantic, arms outstretched, head thrown back in utter, embodied joy. She blinked hard. The other kids glanced at her, she nodded and smiled, and they ran ahead.

At the tide-line, her daughter stopped to gather some shells- unsurprisingly, she’d brought a box and some collection bags and labels. Bemusedly, she reminded the girl that they had all week for that, and it might be easier in the morning. She encouraged her towards the waves and getting her feet wet. The shells would be there tomorrow.

And so would they. 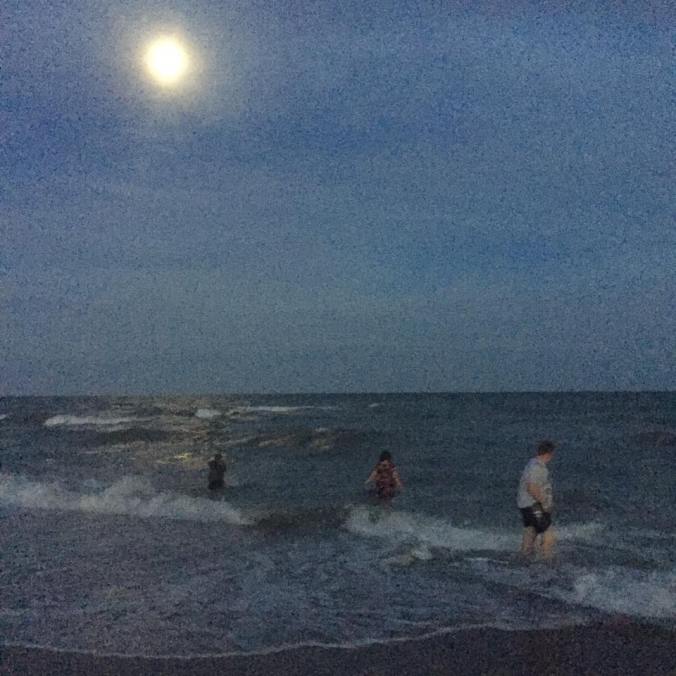 One thought on “Salt Water”