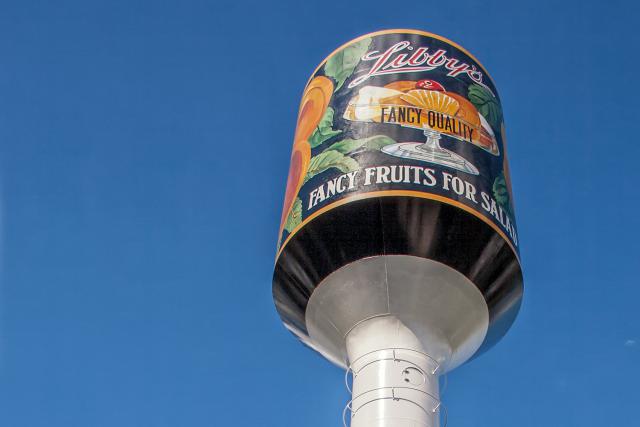 I have no idea where the hostility comes from in my resistance to “billboards.” I read the topic over and over, wondering what I was missing. Not only do I have a vacuum with billboards, but I am kind of pissy to be asked to write about something so seemingly random after two personal prompts.

Growing up, there weren’t many billboards in my part of the world. I don’t know if they’d been banned or we just weren’t in a target-rich environment- but my only memories of them are on long road-trips, and never (ever) in my town.

What we did have was a water tower that was painted like a vintage Libby’s can of fruit cocktail. I loved it when my grandma would drive past it. I didn’t actually like the fruit cocktail, with it’s insipid chunks of indistinguishable fruit and neon plastic cherries, but I loved the giant can towering in the air.

On family road trips, once we’d leave the safety of the west and head east, the billboards I do remember all told me I was going to hell. I was a heathen, and unless I embraced that billboard’s particular religious genre, I would burn, I would die, I would be in misery, and I had to be like them. It left a sour taste along the back of my throat, even as a child. Why would anyone spread messages like that, I wondered.

So I would avert my eyes, hope they were all wrong, and sing along with Alabama or Willie Nelson as my dad piloted our Volkswagen van, sans air conditioning, down the hot interstate. We were headed east over the sage-brush hills out of the safe haven of California, where no one ever told me I was going to hell or to prepare to burn for eternity.