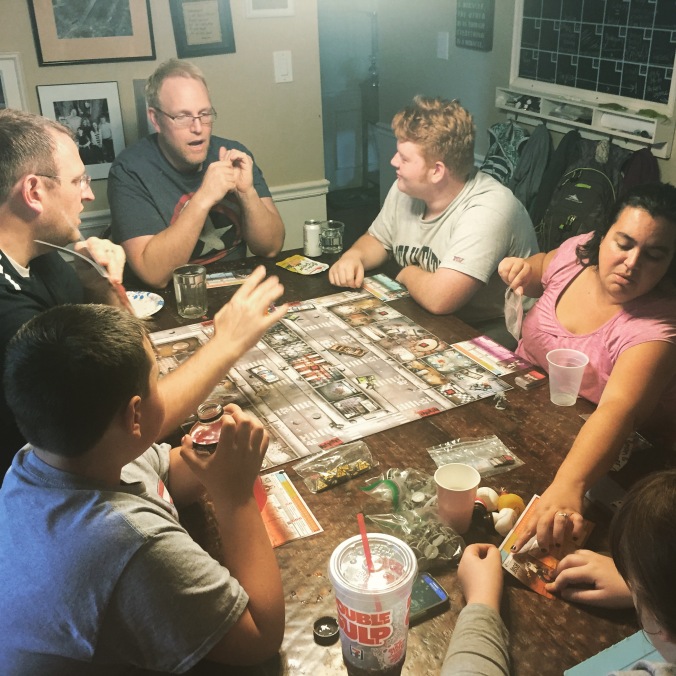 It’s almost the middle of December, so right on schedule I’m getting to Thanksgiving. Anyone who knows me know Thanksgiving isn’t my favorite holiday. Yes, I know it’s un-American, and that my taste-buds offends most of the country. I don’t like turkey. I don’t like stuffing. I loathe anything with visible marshmallows. Gravy is gross. So for years, I made Mexican food for Thanksgiving. It worked well in my world, and my poor deprived children knew not what they were missing. Until Jon introduced them to real Thanksgiving food. You can imagine Jeffrey is a huge fan… Bean and I still huddle in the corner with our personal foods of choice.

So for Thanksgiving this year we had a houseful, and it was wonderful. Jon’s family feels so much like my own family, it’s easy to be at home with them. I am used to loud, boisterous brothers who tell off-color jokes. I am at home around strong women who are multidimensional and not afraid of voicing their opinions. There’s just an ease to being together. It’s comfortable and welcomed.

So after the requisite Thanksgiving turkey, pretty table, et al, we had some fun for a few days. Getting 12 people to do anything in unison is a feat, but we managed it. There was a Korean dinner out for just the grownups, while the older kids got paid to babysit. We learned a new role-playing game and a few of the kids are hooked. We got everyone to the theater and caught Moana (I cried several times over, and enjoyed a deep theological discussion with my brother-in-law over the divine feminine, and on my use of ‘its’). We took everyone to the amusement park, where it was nearly deserted, and the kids got to ride their favorite coasters over and over, while the parents huddled indoors trying to stay warm. I understand completely why Disneyland is in southern California now. Speeding a long a roller coaster is much more fun 0n a balmy 68* November night than it is on a bone-chilling 37* Maryland night. But the kids didn’t mind.

But I’ve skipped over the dishwasher blowing up. It really did. Willy proclaiming, while we stood in the early morning kitchen, “Burning plastic! Burning plastic!!” as the acrid smell flooded the kitchen was the first clue. I thought something was caught inside on the heating element, and pulled the door open. Usually the dishwasher stops when one does that, right? There was the second clue something was terribly wrong- the water jets just kept spinning, spraying water everywhere, while black smoke poured from the little vents on the side of the door. “Kill the switch!” Willy said to a confused me, “What switch??!” Jon came running downstairs and burst into the guest room, where the fusebox is located, and where part of his family were still sound asleep, and ripped open the breaker to kill the power. A lovely way to wake up. So our Christmas present to ourselves was a new dishwasher!

There’s a story in here, too, about how the first one Lowes delivered was actually bent, and how I spent a couple of hours trying to level something that was inherently unlevel-able, and the vindication I felt when I realized my dishwasher-instalation skills were not actually at-fault, and Lowes brought us a nice, perfectly un-bent replacement dishwasher, and that meant I had to un-install the first one and install the new one. But that’s just me bragging about being a FREAKING PRO AT INSTALLING DISHWASHERS NOW. So all I’m saying is if you have a dishwasher that needs installing, including hardwiring, I’m your woman. I got it down cold.

One thought on “And Then The Dishwasher Blew Up…”