It’s one of those fall mornings where the light is golden and the leaves match. It’s finally cold enough (at least part of the time) that the heater clicks on and warm air floods the house. The dog is snoring, ever next to me in his undying loyalty, while I sit in my second-favorite chair next to my bed, feet tucked up under the edge of my comforter for a little extra warmth. (My favorite chair is in my office, where it’s too cold right now, and also the sunlight is better in my room.)

My thoughts are not calm most of these days, and when I do wander inadvertently into a peaceful space, it feels uneasy. I am worried about my country. I am worried about the world. I never wanted to live in ‘interesting times’ and find so much in the news to be unsettling and even frightening. News has always been that way—but there are trends right now I never imagined being attached to the America I was raised to believe in. I know enough history to be very concerned.

With the forthcoming election (everyone, please, I beg of you…vote) hanging in the foreground, I am also deep in the latter-stages of preparing to re-enter grad school. I’m not ready to talk yet about the what, and the where is still being negotiated, but nevertheless the ball is rolling. I waver between thinking it’s bonkers to do this at my age, and then thinking I’d be crazy not to. I’m smart enough. Other people have done it. The years are going to pass regardless. It was bonkers to go to college as a 38 year-old single mother with three kids. I did that. I can do this.

I want to have some legitimate weight behind the kind of SpEd activism and advocacy I have done for years for Bean. I want to help other people, and while I can do that on my own, having the degrees and letters after your name opens doors. If I couple that with my years of experience navigating the SpEd system, with fighting for my kid’s rights, and helping other parents do the same, I have some hope for contributing in a meaningful way to a field about which I am both passionate and knowledgable.

Fun fact: Jeffrey and I could be starting college together.

Which is super weird. I’ve been sending him on the college tours offered by his high school. It’s surreal to think in just a few short months he’s graduating. He was in kindergarten last week, his orange t-shirt matching his copper hair, sitting on the curb waiting for me to pick him up. Now he throws on his letter jacket and grabs his keys and heads out the door with a boisterous, “I’m leaving, mom…” and my heart whispers back, “I know…” Eighteen years is really nothing. 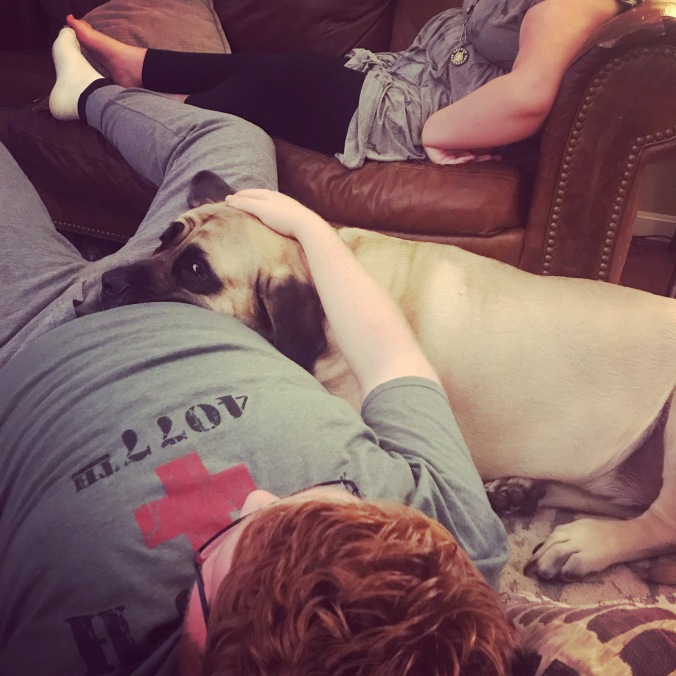 Eighteen years is about what a healthy cat can live. So Abby did the math on how long she could count on a new addition to our family being with her. The answer is that she will be 30, and have finished her PhD. God bless her. So I took her to the local shelter with the intention of letting her choose a cat. They had some guinea pigs, and I was kind of hoping for those, but instead she found a bonded pair of siblings who were five months old and oh my goodness would you look at them and can I hold them please mom? I mean, why not? I spent so many years having to say no to so many things. Two cats are really no more work than one cat, right? So now we have two cats.

Tiberius is…working on his feelings. The cats, in typical cat fashion, don’t care at all about him. He, on the other hand, really loves them and wants nothing more than to love and sniff and lick and hug them. It will be nice when they learn he’s harmless, but we are not there yet. We’re keeping them separate, allowing cats and dogs to alternate between spaces in the house, and where they can see each other, but cannot yet fully interact. That’s what the experts said to do anyway. So far we’re a week in, and Ty still just wants to love them. And they mostly ignore him. I suspect that’s pretty normal.

I’m surprised at how much I like them. I haven’t had a cat since I was a kid, and while I still generally prefer the open, unaffected, and boisterous love of a dog, there is something to be said for the refined charm and subtlety of a cat. Also, they don’t drool. The kids absolutely marveled that the cats knew to use their litter box without any paper training or accidents. Abby is over the moon with happiness. That’s worth it.

Apparently, along with going back to grad school, your forties are also about your body sort of falling apart. Sometimes it feels like after all those years of not having insurance and living on the edge, that things just held out as long as they could, and then everything exhaled and let go at once. And I know how lucky I am. My latest outraged organ is my gallbladder. Waiting to have that sucker yanked, while I live on Tums and Powerade. If you’ve ever had gallbladder pain, I tip my hat to you. I’d rather have another ten-pound baby with no drugs than to have this monster tearing up my guts.

On the upside, I’m not fainting anymore. The iron infusions from this summer did the trick, and for the first time in my adult life, I am not anemic. My hair stopped falling out, I have energy again, and not fainting in the shower or falling down the stairs is pretty great, I have to admit.

Two dear friends are getting married this coming weekend after the most amazing, decade-long, and star-crossed love story you could imagine. She’s a Mormon, he’s a Catholic, they were both previously married, and they approach the altar this weekend with letters from both the LDS church and from the Vatican, blessing their marriage. It’s going to be just overflowing with joy and love. The reception is mid-century themed, and I found Bean a red tuxedo jacket (Satin lapels and everything!) at the thrift store. The girls are wearing crinolines and spectators. Jon and Jeff are wearing pin-striped suits. I will change my mind at least 12 times between now and Saturday.

Last Saturday, by the way, Bean had a little adventure. The week before, he made a tweet (do you Twitter?) asking our local grocery store when peanut butter was going to be on sale again. I had previously bought 6 cases when it was on sale. Bean numbered them 1-72, and he’d just opened jar 72. We needed more. Surprisingly, the store responded, and said if he got 72 retweets, they’d give him 72 more jars! Thus began his adventure…

He got the 72 retweets in hours, which is awesome, considering at the time he had maybe 8 followers on Twitter, all of whom were us. But then Twitter did what it can sometimes do, and the grocer, Lidl, a German company that just opened shop in the US, challenged him to get 72 thousand retweets and get a lifetime supply of peanut butter. He tweet is currently at 33 thousand retweets and hundreds of encouraging comments from people all over the world. I don’t know that he’s going to reach the magic number, but it’s been fun and has helped amplify the voices of other adults who also have self-restricted diets and food or texture sensitivity due to Autism. And Lidl has been lovely to him.

We picked up his 72 jars from the store on Saturday. He wore his Rainbow Party Suit, after we put a poll on Twitter. Sometimes, every so often, social media can be a force for good and not just wreckage. Lidl did it right.

I’m just going to ignore Halloween, which I think is tomorrow.

We have family coming in for the holidays and I am so happy! Jon’s parents will be here for most of November, dividing their time between us and Jon’s brother, who just moved to the area. I love having family visit, and I love my in-laws. I love that we finally have family that lives close. One of the hardest things about moving to the east coast was being so removed from my family—it still is. But Jon’s family has felt like my own family from day one, and having someone nearby who you love makes a huge difference. We have November birthdays to celebrate, a baptism, some awards, Thanksgiving, a holiday concert, and we get to decorate for Christmas.

Oh, and I dyed my hair red. It’s October, and no one stopped me this year. Dammit.

One thought on “Journaling October”