I love Christmas, and while I get Epiphany, when you’re like me and deck your halls on or before Thanksgiving, by December 26, you’re ready to take that shiz down. I lasted until December 27 this year, because we had to have Second Christmas when we picked Kelsey up. That’s love, folks.

But backing up a bit… 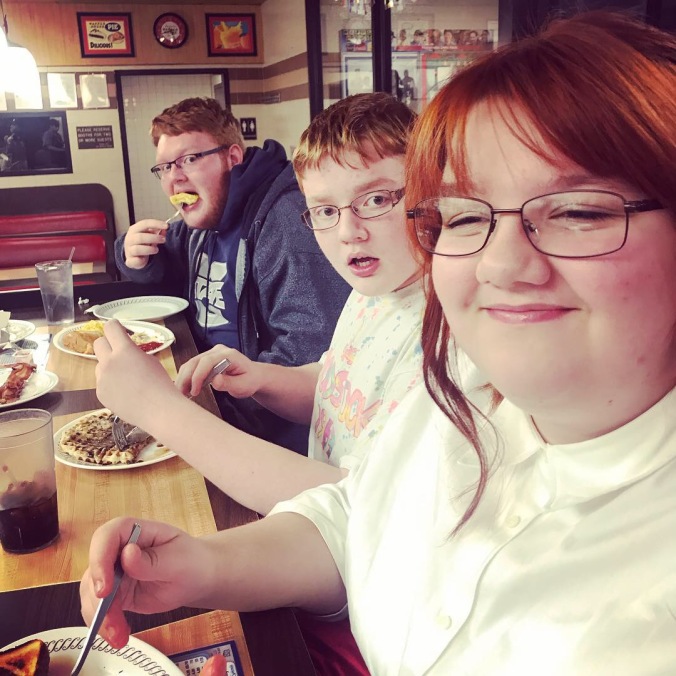 We started the month (Because our trees and halls were decked the week before in November I love when Thanksgiving is early!) with our final, very last, middle-school holiday band concert. Abby was able to play her euphonium with aplomb at the 8th grade concert. The rule for us is that after a concert, the musician gets to choose the family activity, and Abby chose dinner at Waffle House. We were all in, even Bean who agreed to try a waffle, which was awesome, until he finished it and then ran outside to hurl in the parking lot. Best of intentions? A win anyway? Eh, who can say.

We’re all having a hard time processing that Jeffrey is turning 18 this coming year, most of all him. At our church Christmas party, he still tried for the Santa Knee Sit, but his ultimate goal is to wear the red suit himself. His uncle David spends December visiting sick kids in Utah hospitals in a custom made red velvet Santa suit, and Jeff has been uniquely inspired by this. So much so that it’s retooled our family New Years Eve plans. But that’s getting ahead of myself.

The cats continue their hostile takeover, and Tiberius continues to be confused as to how many cats actually exist, and where they are at any given time. It’s amusing.

The boys moved their basement apartment around again, and for the first time in their lives, they have separate bedrooms. Bean took over the guest room, and Jeffrey stayed in the main studio. We found ourselves playing basement Tetris again, and had to add another bookcase with the deconstruction of Bean’s old loft bed. I mean, he’s over 6′ now, and it was getting a little silly, him climbing up there every night so his feet could hang out the end. There was also new wall space, and as a surprise, I pained this while they were at school one day.

I live tweeted my gallbladder surgery, and I am more than happy to report that the offending member has been excised and burnt to cinders. My incisions are still tender, but for the most part the constant pain is gone. Man, if you have gallbladder issues, I cannot recommend enough the benefits of having that sucker yanked. I’m exactly two weeks post-surgery, and I would do it again today if I had to. It made that big a difference, that quickly. My good friend Andrea sent me a stuffed gallbladder to help me get over my loss.

As is tradition, we baked about a million and a half cookies, had our annual frosting party, and then delivered our goodies to our neighbors.

Christmas itself was small and sweet. We’re effected by the government shutdown, as always, and that’s after two cars needed new brakes last month, so we have to be really careful right now. The kids are old enough to understand, and we had a nice day anyway, with lots of love from friends and family, even when they live far away.

The week between Christmas and New Years is really the Lost World. We’ve watched a lot of movies, spent time hanging with each other, and cooked a lot of good food.

New Years Eve is our traditional tamales day, but as I mentioned, Jeffrey got a wild hair. Tonight, as training for his eventual goal of Santa, we are baking pies to deliver to fire houses and police stations, as acts of service to service people on a hectic night. His goal was to bake ten pies, and we’ll then deliver them later tonight. So far, as of this writing, there are five pies cooling on the kitchen counter. I did help with the latice work, but I think next year, he’ll be okay on his own.

So the rest of the year was a bit of a slog in more than one place. Things are uncertain for us (and a million other people) right now as a government civil servant family. I don’t do New Years resolutions. At all. But what I did see was a message from President Obama challenging each of us to do more to help others, to serve, in 2019.  So I decided to do something that is really scary, and I shared something I have been working on for a while now.

And with that, we look forward to a new year, and new adventures, and hopefully, a better, more stable, more loving world for us, for you, and for people everywhere.

2 thoughts on “December: A Short Summation on a Year That Took Forever”