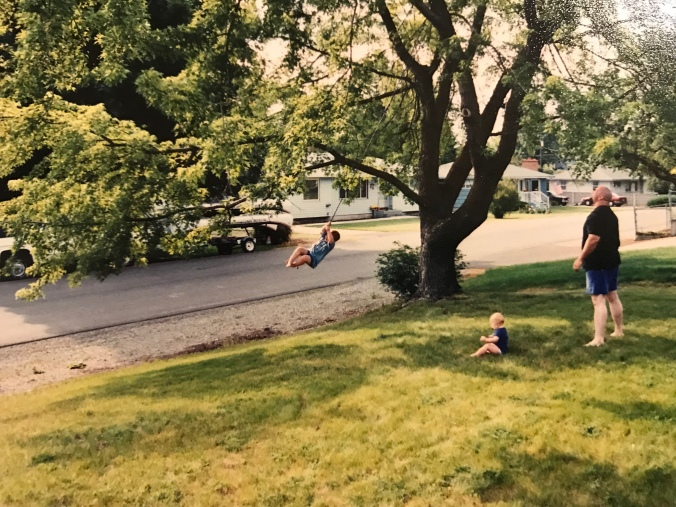 The sun is very definitely in Pisces, and it feels like you.  It also feels like home to me. Of course it does, I can hear your laughter and see you pointing at me. I think it’s your laughter I miss almost more than I miss being able to talk to you. As the kids get older, there are so many times I want to reach for the phone, to get your input, your wisdom. I’m a little surprised to find myself occasionally mad. Grief is such a fluid animal. I know you didn’t leave on purpose, but dammit, sometimes I get angry that you’re gone. I recognize that’s about me, and is mine to deal with, but I also know you well enough to know that you’d nod and tell me that it was okay, feelings just are what they are.

Each night lately, the kids all gather in the bedroom with Jon and I, and I read a chapter of the book I wrote about us. Between the five adult-sized humans, the giant dog, and now two cats (did I tell you that? we added cats) the room is overflowing. Bean usually lays on the floor with the dog, while Abby and Jeff take the two reading chairs. The cats do whatever the hell they want, because they’re cats. All three of the kids wanted to read the book, but all three said it was really hard, and having me do it would help. Thus began our evening project. The best part is that we can stop, talk about what’s happening, and I can fill in details and answer questions, and they can discover their own memories tied to where we are in the book. It turns out writing is an excellent way to preserve memories. Who knew? There is a feeling of closeness and anticipation that I didn’t expect; three teenagers actually want to listen to their mom read every night.

It’s also allowed me to see how small a sliver of who we were that I’ve managed to preserve. But it’s better than nothing.

Remember how I said I was going to maybe focus on something more academic for the future? Well, I applied to law school. I know, right?! I’ve spent the better part of a year on it, but we’re in the home-stretch now; I’m getting back answers on my applications. It’s all theoretical until you get that yes… but what an impact that yes makes when it comes. So far, I have heard back from two of the half dozen schools where I applied. Both said yes. It feels surreal and I never imagined I could actually do this—I have some imposter syndrome crap to work through, but it looks like I’m going to law school. I can hear you laughing, saying give me a bucket, because of course.

Jeffrey is getting ready to graduate high school. That’s even more surreal than me going to law school. He’s nearly the same age I was when we met. He’s such a good kid, you’d be insanely proud of him. Just this week we got an email from is criminal justice teacher praising his character and recommending him for a scholarship. He’s interested in forensics and investigative law enforcement, and he was accepted to Utah State. I’m not sure any of us are ready for that, either—including him. But he’s also brave and has a very strong sense of self and who he is. He wants to do good in the world.

Bean has had quite a year. He’s become something of a minor celebrity. Through a series strange and weirdly modern events, he won a lifetime supply of peanut butter from a German grocery store chain. Because he’s Bean, he looked at that lifetime supply and told me we needed to share it. So he did. With the help of the grocery store, he had two giveaways for furloughed federal workers, and then he donated another 1800 jars to a local food bank. He shrugs off the attention, and keeps being Bean. He’s started playing lacrosse, and is enjoying it far more than football. Hey says there are no asses on the lacrosse team. I trust him.

Abby flies under the radar as much as possible. She made all-county band and is an alternate for all-state band as a 12 year-old. We didn’t find out until we showed up for the concert and looked at the program. She just kept telling us she had a band thing, but she didn’t think it was a big deal. (The two cats are hers, by the way.) She’s insanely talented at drawing, but her real passions is still in science. She goes to the high school with her brothers each morning for classes before heading back to the middle school to finish her day. She’s finding her grove and has a quiet Taurean resiliency about her.

Our tradition now is to celebrate your birthday each year with Hobbees shakes and papa’s papas. Tonight, Bean has a lacrosse game, so our birthday meal is being pushed to tomorrow morning instead. When we discussed this last night, the kids all felt you’d understand, and that you’d probably rather watch Bean play his game anyway.

There are times it feels like you’ve been gone for a lifetime, and there are times it still feels like yesterday. I hope you are occasionally able to be nearby, and that you can see or feel the kind, decent, beautiful humans our children are becoming. I often think about what you said after Jeffrey was born. You told me it wasn’t about us anymore. That, to paraphrase Kahlil Gibran, our children were the arrows we would launch into the future, and life was now theirs. You weren’t wrong. You seldom were.

We miss you. I hope you have found peace.

One thought on “Happy Birthday David”

We had to take Tiberius to the vet. He’s ok—just a pulled muscle. He weighed in at 191 pounds. Have to get his meds at the people pharmacy.