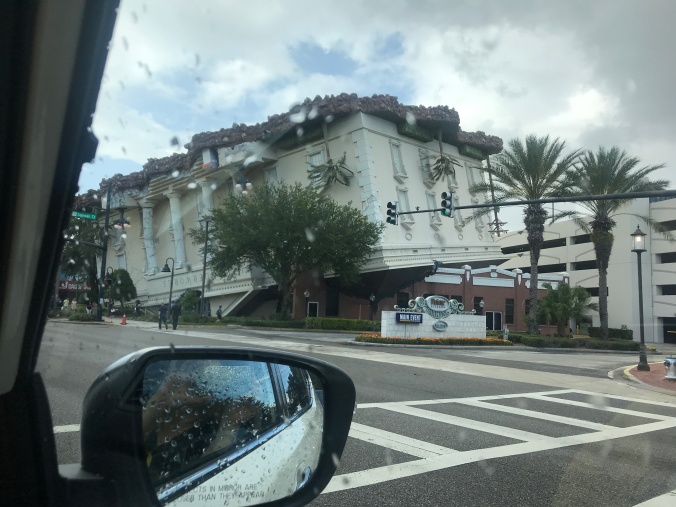 I’m not yet prepared to sort thought the tangle of emotions that accompanied the shooting at my kids school last week while I was away (for the very first time ever!). I mean, the confluence of things happening all at once makes me think I should have bought a lottery ticket instead of taken a flight to Florida.

Of course Florida is home to wonderful communities, indigenous people, and regular lives. One of the reasons I opted to join Jon—other than never having been to Florida and it being a 48-hour gig—was because a close friend lives there and I wanted to see her. She’s a regular person—a college professor, a mom, and a recent PhD. But that regular part of Florida? That part with real things? That’s not what I found in Orlando.

I’m sure there must be countless evocative think-pieces on the artificiality and sprawl nurtured and fed by the enormous monster that is the Mouse-centered tourist industry in central Florida. I maybe should have read them first, because folks…I was not prepared. Mile after flat mile of low-slung hotels in inoffensive pastel colors with Bahamian shutters surrounded by man-made lakes with a single fountain (mosquito abatement, I was told). I suspect it’s a different experience if one stays on the Mouse properties and is seeking the entire Experience. What I saw, instead, given that we were not there for that experiences, was stark tiers of privilege and class.

Orlando–at least the parts down near the parks, struck me as a perfect Potemkin Village. Nothing is real, it’s all artifice. Depending on your socio-economic status, you can buy the really pretty village where the curtain is meticulously cultivated and maintained, where you’re carefully protected and insulated from the reality behind the scenes. But man, does that come at a cost.  People who cannot afford that level of cultivation—most folks, I imagine—have to opt for whatever they can afford in an attempt to experience this fantasy, which will be on one of the outward radiating circles from the Mouse-eared epicenter.

Every restaurant was contrived. Every store was packed to the rafters with mouse-themed merchandise–licensed to be sure, but not the same as available inside the parks, because that would dilute the brand and violate the curtain. Outside this most privileged and expensive circle, there were the Plan B parks—some of which appeared to be very nice, but make no mistake, they orbit the center, not the other way around. Without the Mouse, even the nicest knock-offs wouldn’t be there. I won’t even touch the exploitive nature of parks that monetize sea mammals. Just watch Blackfish.

I think this is what happens when one moves from creating a -Land to a -World.

A Land is a nice place to visit and spend the afternoon. A World requires everything around it to sustain it. I’m not at all casting aspersions on the people who enjoy this, or who are employed and like their jobs. I’m simply noticing, as an outsider, what a strange feeling it is to be in a place that feels so completely unnatural.  As an aside, I am concerned at the caste system that seems to have sprung up in these parks—once up on a time, everyone paid to get in and everyone waited in line and everyone got to ride the same rides. Now, it appears wealth can buy access to shorter lines, earlier entry, more attractions, and a completely different park experience.

As someone who literally grew up in the -Land, I cannot imagine Mr. D sitting on his park bench waiting for his daughters and thinking what has happened to his dream was a good thing.

Anyway, Florida is weird. I saw an armadillo. I met a glorious white boxer puppy at the supermarket. We never did find any good food (but I know this was entirely because of where we were staying), but I did get to meet my friend for breakfast. I did get a two nights with my husband, which we spent hanging out in one of the several hot tubs at our pastel-painted bahamian-shuttered hotel.

And then we tried to get home.

(I know people are passionate in their love and defense of Disney, and if you love love love the parks and it’s your happy place, believe me, I understand. I just don’t experience the same feelings anymore, for a host of complex reasons—some of which I tried to share here—and that’s okay too!)

2 thoughts on “Land vs. World”