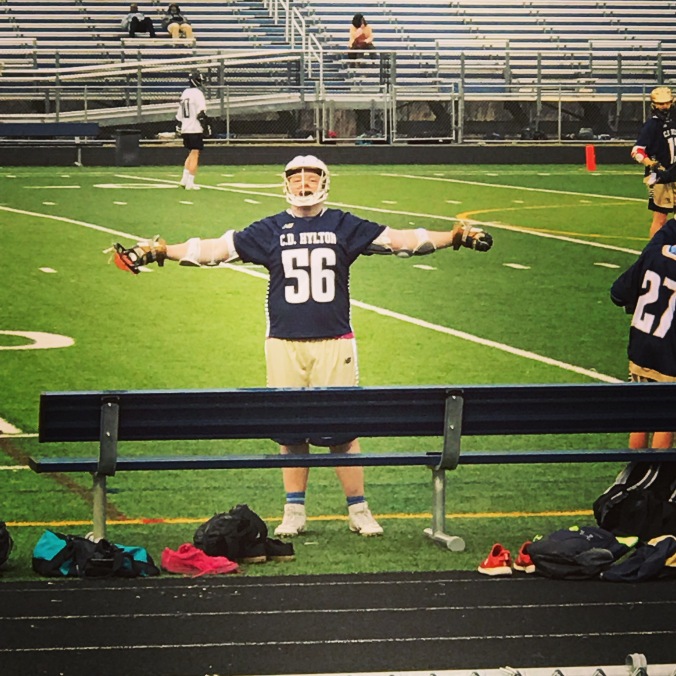 So last night was the awards banquet for Lacrosse at the high school. We all went, enjoyed a pot luck dinner, and then received a nice surprise when the head coach (who is also Bean’s SpEd teacher) made a little speech and presentation about him. I filmed it on my phone, but it’s garbled, so I transcribed it here, because it’s really cool.

This kid…he tried out for my other sport first. He came out, and kind of only lasted a day. He really didn’t like the [football] atmosphere, but I still had him in my class. He sat back in his corner, did his thing, had his backpack with rainbows and lights… I asked him once if he had anything other than tie-dye. Nope. So we talked and talked. And one day, he says, “Hey Coach!” —and that struck me, because he usually called me Mr. C—this day he said “Hey Coach. I’m looking to try a sport and I’m thinking about Lacrosse or Crew.” I told him “Well, Crew costs a lot, so why dont you try Lacrosse? It’s not like football, we’re a different group, more of a family.” He told me he didn’t know what he was doing, and I assured him that we’d teach him. So he comes out the first day of practice, and you can see him going a mile a minute, trying to figure this sport out.

So as this is all going on, lo and behold, he’s also our local celebrity—he decides to tweet at Lidl about some peanut butter [laughter & applause cheers start of Bean! Bean! and the coach invites him to the front] And so he does all this and becomes a celebrity. Everyone knows who he is, knows his name, he’s giving away peanut butter everywhere [garbled in cheers and more shouts of “Bean!”] and then I get this hair-brained idea, two weeks before I decided to do it, “Hey! Lets do our charity game for autism! Bean, lets do something for autism!” Alright cool! He picked out the tie-dye, he picked out the slogan, he picked out the logo—everything! (me, off camera, “he didn’t tell us any of that!”) So we decided that’s what we’re going to do. And that’s something that, in talking to your mom—don’t make her cry!—I learned that this is the first time you have truly felt like you were part of a team. This is a very special group, and these guys loved having you as part of their team. We loved seeing you get the peanut butter [garbled, lots of laughter, more shouts of BEAN!]

So this was his first year, and I’d go out before the games and I would have to tell the refs “Hey, I have a kid on the spectrum, so be aware, he’s going to get upset and say some things really, really loud [laughter, “Bean!”]—so don’t worry about it, let him be. So then the refs started knowing him and asking who the kid is who always wears the tie-dyes? The refs all knew about Bean, and they were impressed to see how much you’d grown from the start of the season to the end. I have seen you grow tremendously. You can go out and say “hi” to people now! You can interact with people you have no clue about, and now you’re standing here in front of everyone! [applause and cheering and BEAN!] We’re proud of you, Bean!

Coach hands him an award and they all shake his hand. He’s smiling and wiggling back and forth. It was really a lovely moment, and a testament to the power of Special Ed teachers and the work they do. Thanks, Coach C.